With Frederick The Great: A Story of the Seven Years' War 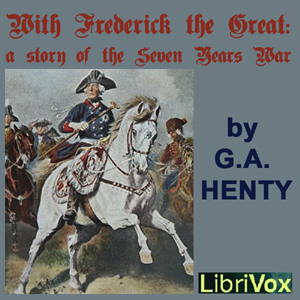 With Frederick The Great: A Story of the Seven Years' War

LibriVox recording of With Frederick The Great: A Story of the Seven Years' War, by G. A. Henty.
Read by Gary Olman

Among the great wars of history there are few, if any, instances of so long and successfully sustained a struggle, against enormous odds, as that of the Seven Years' War, maintained by Prussia--then a small and comparatively insignificant kingdom--against Russia, Austria, and France simultaneously, who were aided also by the forces of most of the minor principalities of Germany. The population of Prussia was not more than five millions, while that of the Allies considerably exceeded a hundred millions. Prussia could put, with the greatest efforts, but a hundred and fifty thousand men into the field, and as these were exhausted she had but small reserves to draw upon; while the Allies could, with comparatively little difficulty, put five hundred thousand men into the field, and replenish them as there was occasion. That the struggle was successfully carried on, for seven years, was due chiefly to the military genius of the king; to his indomitable perseverance; and to a resolution that no disaster could shake, no situation, although apparently hopeless, appall. Something was due also, at the commencement of the war, to the splendid discipline of the Prussian army at that time; but as comparatively few of those who fought at Lobositz could have stood in the ranks at Torgau, the quickness of the Prussian people to acquire military discipline must have been great; and this was aided by the perfect confidence they felt in their king, and the enthusiasm with which he inspired them. ( Summary by G .A .Henty )

Uploaded by librivoxbooks on December 12, 2011